Warning: "continue" targeting switch is equivalent to "break". Did you mean to use "continue 2"? in /home/blaze786/blazetravels.com/wp-content/plugins/revslider/includes/operations.class.php on line 5429

Warning: "continue" targeting switch is equivalent to "break". Did you mean to use "continue 2"? in /home/blaze786/blazetravels.com/wp-content/plugins/revslider/includes/operations.class.php on line 5437

Warning: "continue" targeting switch is equivalent to "break". Did you mean to use "continue 2"? in /home/blaze786/blazetravels.com/wp-content/plugins/revslider/includes/output.class.php on line 7229
 ISTANBUL – As experienced by Sidra Amman Shah – Blaze Travels & Tours
+92 42 37189691 info@blaztravels.com

I flew from Abu Dhabi and my friends came from Islamabad. We jumped on this opportunity I didn’t know how to present it my husband. Would he be annoyed? I wondered as I planned another vacation whist I was on vacation in Pakistan. It was done, dusted and digested. I’ll give you some tips if you ever choose to visit Istanbul. These may turn out be absolutely untrue for you and could be branded as blatant lies[they are not lies, different people can have different experiences okay?].

We understood that Turkish Lira and Euro both work in Istanbul but that’s not true. Only Turkish lira is the main currency in rotation. It makes sense because IT IS THEIR CURRENCY, you know. My husband told me to convert all my money into Turkish Lira but did I listen? You bet I didn’t. Nobody asks for Euros. Nobody has change for euro.

I was made aware of the fact that Cabbies try to rip you off by not turning their meters on and asking for stupid amount of money. I was also suggested that taking public transport is very easy and convenient. Blatant lies. First of all, you need a card for public transport that we couldn’t figure out where to get from since hardly anybody spoke English.
My theory is; If you’re on vacation and an hour out of the five hours you were going to spend exploring, gets spent trying to figure out where the bloody station is, which bus goes where and where to get off, then you’re wasting more money than you’re saving. Experience is money. Also, I went with my mum and I did not want her to have to hop on hop off busses and run to catch the next one because I love her and merimarzi.

Finally, my taxi experience was INCREDIBLE. All you have to do is ask if their meter works. It happened thrice that people tried to charge us four times the amount but we just told them they’re trying to rip us off, they’re idiots, we’re not and walked off like bosses. We always found someone who took us to where we wanted to go with meter on and amazing Turkish disposition. Woah! Big word.

We understood that food is ‘super cheap’ which wasn’t exactly, entirely true. Estimate meal cost for one person is about 30TL. That’s about AED 32, PKR 920, that’s not super cheap.
The local cuisine is fresh and no-nonsense style. They keep things simple with the cooking techniques and don’t add overpowering spices. I stuffed the local food in my face throughout the trip and loved it. 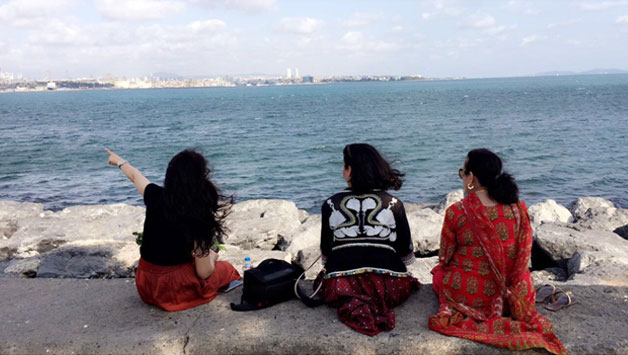 When initially planning the trip a lot of people suggested two-three days are more than enough to see Istanbul and we should try and see another city. After all, how often do you visit a new country? We stayed in Istanbul for 6 days and there still were places we wanted to see but missed out on. You need a full week to enjoy this amazing culturally rich city. And really enjoy it, not tick off main spots and call it a day.

Our focus was just taking out time and soaking in the feeler of the place instead of rushing about trying to see everything. The vibe of it is just amazing, so soulful,mellow and chilled out but enriching and refreshing at the same time. If there were no cars about you wouldn’t know what era you’re in. We used to just sit on a bench in the shade and talk for hours.

Blaze Travels & Tours was established in 2008 with IATA accreditation, starting out with Umrah services and air ticketing.After securing a commendable number of clientele and expertise in this department, in 2015, BT&T took on the challenging task of operating internationally. We have successfully established DMCs stationed in South East Asia, the Subcontinent, Eastern Europe, North Africa, The Middle East and America.